Testing 2.0 - A Crash Course in Statistics

Despite knowing that your child is bright, you are starting to see their grades slip, even with hard work and dedication in their classes.  They are growing increasingly anxious, frustrated, withdrawn, and school resistant.  The behavior is beginning to take a turn for the worse, teachers are getting worried, administrators have been calling home, and your child has been recommended for educational testing to provide metrics to help your child - not only to access the curriculum, but to feel better about themselves and re-engage in the school community.

The testing results come back, and at first glance everything looks great.  They have a Full Scale IQ of 123 (Superior Range/Very High, 16th Percentile).  This is great news!  Your student has more intellectual horsepower than 94% of the population.  But then why are they struggling in school?!?  The answer may lay buried further down in the sub-test results, and a crash-course in statistics might help you understand their struggle, and what you can do to help. 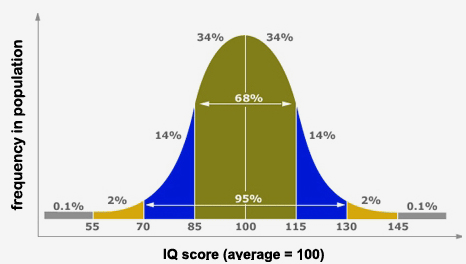 Now let’s look at how this Bell Curve is applied in the Weschler Intelligence Scale for Children, Edition 4, (WISC IV), which is likely a component of the testing your child has received. 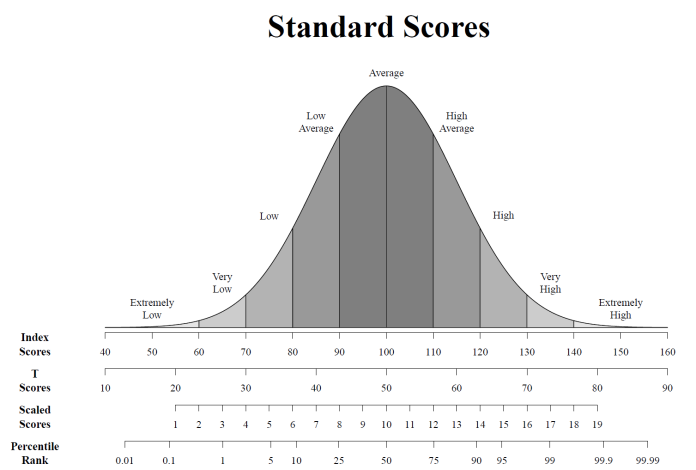 As you can see, the Average score is 100, just as was demonstrated above.  In fact, the “Average” category extends from 90 - 109.  Your child’s score of 123 falls comfortably into the “Superior/High” range .  But don’t get caught up in the score ranges, because their trouble in school might be hidden somewhere in the sub-tests, and in the statistical complexity of “Standard Deviations.”

Without taking you all the way back to your STATS 101 Class (and the all-nighters it took to get through it), let’s leave your student for a moment and use a simpler example, comparing the heights of two families of four.

In Family #1 all four members are exactly 4’ tall.  The average is 4’, and there is a Standard Deviation from that height of zero.  The data points are well grouped, and nobody is going to stand out as either short or tall when the Family Holiday Card photo is taken.

This is also why only using the average height of the family is a terrible way to decide how tall door frames should be.  While a 5’ door frame may actually be OK for Family #1, there are bound to be a lot of bonked heads if the same decision was made for Family #2, who has the exact same average height.  While the Average is an important number, understanding the Standard Deviations in the spread of the data is also incredibly valuable.

Now that we understand Standard Deviations, let’s get back to your child’s WISC IV testing, which (always) has a standard deviation range of 15 points.  Your child scored a Full Scale IQ of 123.  That is (still) exciting, but further investigation unearths a sub-test score of 93 in their Processing Speed.  Now, 93 isn’t bad.  In fact, it’s still well within the range of Average when normed against the entire population, and in the 45th Percentile overall.  If their Full Scale IQ was 98, or even 105, there would be less of a spread, the data would be more tightly grouped, and his scores would look common, more average, less variable - analagously like the Family #1 Holiday Card.

But that’s not your child.  In hopes of clarifying things, let me transpose the Intelligence scores to our height metaphor: Your child has a Full Scale IQ of 123 - his IQ is 6’ tall, and it’s standing next to a 3’ tall Processing Speed Score.  The rub for your child isn’t that the Processing Speed doesn’t work well (in fact, it’s still working better than a significant percentage of the population and well within range of most of the population), the rub is that his Processing Speed is two full Standard Deviations off from his Full Scale IQ (remember: when evaluating the WISC IV, 15 points is always considered one Standard Deviation).  The relational difference between the two scores is statistically significant, and it is this relational difference which is contributing to the challenges - both academically and socially that your child is experiencing.  This is visually represented below:

When your student is forced to perform time-pressured  tasks, juggle multiple incoming data streams, and make quick decisions, he is limited by the top end capacity of the most stressed portion of his neurology - in this case, the Processing Speed.

What does all of this mean for your child, as an academic student?

Allow them to take tests untimed, ask teachers to provide class notes before the lecture, and give your child with this type of “learning difference” a little bit more time to think about answers before they’re called on to speak.  In other words, remove the governor their Processing Speed has on their Full Scale IQ, and their performance will likely jump to the 6’ level.  In fact, when two or more data points are two Standard Deviations apart in educational testing measures, your child becomes eligible for Special Education accommodations, and in this case of a Full Scale IQ of 123 your child is actually what is termed Twice-Exceptional (they are both Gifted by nature of their 123 “Superior/High” intelligence, and they have an identified Learning Difference by nature of the 30 point, statistically significant, two Standard Deviations spread between the Full Scale IQ and the Processing Speed of 93).  Getting the accommodation this child needs to access innate abilities could be one of the greatest gifts you ever give them.  This is the power of reading the sub-test scores and understanding Standard Deviations.

And for you Math Geeks:

Previous Post
Give It a Rest!
Next Post
Planning for the Long Term: Top 5 Questions for Teen Autism Spectrum Disorder (ASD) Programs